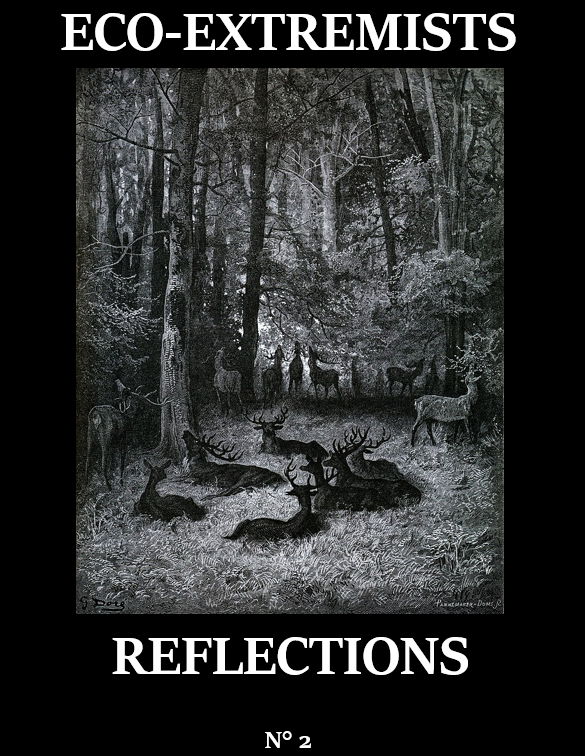 In this second issue, we bring an old reflection by Abe Cabrera, evidencing already by those days the clear differences between US and the rest, those groups and characters with more progressive inclinations although they deny it, we are talking, of course, about the anarcho-primitivists and co.

At the same time, we bring a large part of the important reflections of Chahta-Ima, an eco-extremist theorist, pioneer in that field, who with his sharped critics and thoughs was cutting the root of the rotenness that the modern ideologies are. We mention that the writings by Chahta-Ima have been invaluable for some of the individualists who are doing this work and we highlight them with great appreciation and pride.

And finally, an extract from the text “The Calusa, a savage kingdom?”, Whose teachings are too important to be forgotten.

We are very thankful for the contributions from the accomplices in the Animus Delendi blog, whom have helped us with the English translations for some of the texts on the first notebook, in this the number two as well and in the next ones which are still on preparations. The complicity between individualists brings the possibility to carry on with every editorial effort we have in mind, thus it allows us to move forward within the Tendency polishing are approaches, exchanging thoughts and posing new questions.

“Saving the World” as the Highest Form of Domestication

What do we mean when we say, “nature”?

Lessons from the Yahi War

Lessons from the Calusa